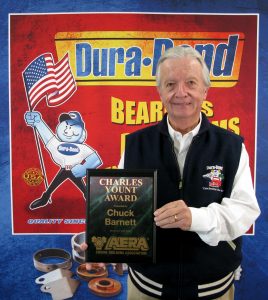 One of the sad things about this COVID pandemic, is not having trade shows and the opportunity to gather and celebrate as an industry. I sure missed the AERA/PERA Engine Professional VIP reception normally held at the PRI Show in Indianapolis. Having our industry friends together to celebrate another year is special. In addition, it gave us a true industry gathering and the opportunity to present some industry awards. On the bright side, the awards still happened. I was honored to present this award at the AERA Super Webinar 2, held back in November.

The Charles W. Yount Award is named after a long-time supporter of AERA whose name bears the award. This award is given for recognition of outstanding service to our industry and is the highest award our association presents. The first award, given for outstanding service, was given on June 4, 1956, to Charles W. Yount, the founder of Eagle Machine Company, in Indianapolis, Indiana. He served as President of AERA from 1926 to 1927. For many years Charles served as Treasurer of AERA.

This award has only been given 29 times since its inception. To receive this award the candidate must be nominated by a previous winner of the Yount Award and recommended to the Executive Committee of AERA’s Board of Directors.

Our next recipient was unanimously voted on to receive this honor. His commitment to this industry and our Association is unparalleled.

He grew up in Seattle, Washington. He went into the Navy during the Vietnam War in the VAP-61 Photo reconnaissance squadron. Deployed to four aircraft carriers in Guam, the Philippines, Australia and Thailand. He then returned to finish college at the Jesuit – Seattle University with a degree in Business/Marketing. He then joined General Motors – AC-Delco in Seattle, New York and Los Angeles. He was later recruited to be General Sales Manager – North America for Paccar (Peterbilt/Kenworth Trucks) in Seattle. In 1995 he was hired as President of Dura-Bond and moved to Carson City, Nevada. He leads a team of employees that are among the most qualified engine rebuilding component technicians in the world. Under his watch, Dura-Bond continues the fine tradition it has developed over 70 years with its employees, customers, and vendors. His hobbies include several vintage cars, fly fishing, traveling with family, and spending time with his wife Geri, daughter Tiffany Barnett and special buddy, a Golden Doodle, named Hudson.

Chuck Barnett, we are honored to present you with this award for outstanding service to our industry. Much deserved!